Mayoral candidate Shelley Aloi is ready for the fight … First goal: Kick McClement and Holtzinger out of the primary! 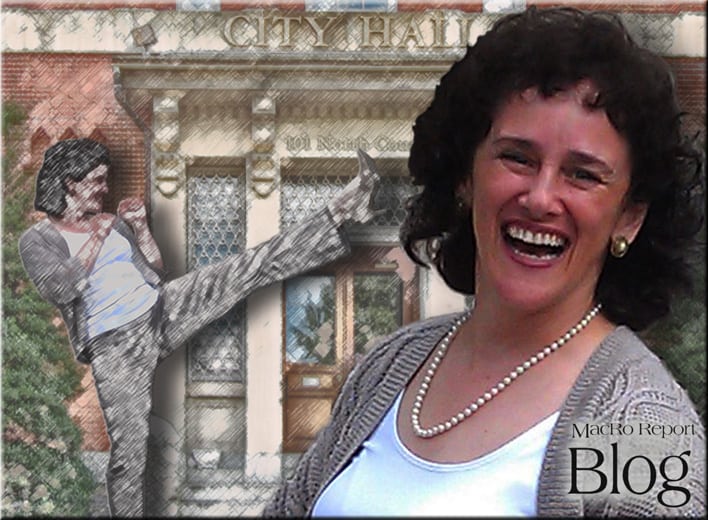 Taking a page out of a ninja super hero script, Alderman Shelley Aloi waited until the last moments of the 2013 City of Frederick mayoral filing deadline to announce her candidacy last month on July 2nd.

With former Mayor Jeff Holtzinger filing a week before Aloi, as late comers, they  are far behind in the fundraising race according to recently released filing reports. Anyone following the race clearly knows that the fight of focus is on the Democratic primary where Karen Young and Galen Clagett have raked in well over $100,000 in contributions compared to less than $17,000 total for the three GOP candidates.

So considering the overwhelming money advantage, does any Republican even stand a chance to win in the November general election?

I spent some time talking with her a couple of weeks ago, where she laid out her reasoning for entering as an underdog in this very crowded field.

It was after a meeting that she had with Mayor Randy McClement several months ago. Purpose: to decide if she could support him in his re-election campaign.  Result: She became convinced that it is time for him to be replaced.  As she left the room she says that she looked at him and stated: “It is my intention right now to run for mayor.”

When first meeting Aloi, many will get the impression that she is the warm and silent type.  Spend more time talking with her, and you will discover an edgy side of a strong willed campaigner, who deeply desires to display her leadership.

She says that while the mayor has given many the impression that he has maintained a steady hand on the wheel, look below the surface and one will see a lot of unresolved issues that require strategic thinking … something she says McClement sorely lacks.

As for Other Post-Employment Benefits (OPEB), by grabbing some low hanging fruit out of the package the administration has been able to reduce the $128 million unfunded obligations to city retirees to $104 million.  But with that there are a number of other issues that can and (likely) will exacerbate the problem.

Consider, she says “the commitment made under the new contract with city employees that extends the provision of 100% of healthcare premiums as well as full coverage for their spouses, future spouses … and dependents!”

Her case in point is former Mayor Ron Young.  Since he was sworn into the city’s top job in 1974 up until he qualified for Medicare in 2005, he and all of those he declared as dependents over the years, “including his current spouse Karen Young, have received free healthcare from the City of Frederick,” states Aloi.

While the rules are the rules, and former employees can take advantage of such, there aren’t too many public or private organizations that offer such generous benefits.

“Nobody anywhere does that … Nobody!” she exclaims. [Editor’s update: as of August 15, 2013, Mayor and Board of Aldermen voted to modify these regulations]

Consider also the former employees who optioned the take advantage of the early retirement buy-out and pension offering made by then Mayor Jeff Holtzinger.  As it turns out 14 of those folks who were rehired by the city now qualify for a second retirement benefit!  Double dipping from the same employer?

Among the ranks of city staff there are about 130 employees who will be eligible to retire within the next 5 years.  This gives pause to Aloi, as there is “no succession plan … that’s a lot of institutional knowledge that could be lost.”  A costly thought, she muses.

What should be done about the city owned Hargett Farm?

When then Mayor Holtzinger succeeded in his battle to purchase the Hargett farm, it appeared that the idea of a 148 acre regional park at a base cost of $18 million was workable, but times have changed.

In a recent candidate forum sponsored by the Frederick Gorilla Magazine and WFMD radio, it was clear to most that along with heavy monthly costs of over $100,000, there is no realistic plan.

As for Shelley Aloi, she asked, “Are we going to continue to wish [that the city can afford to develop the property as a park] or cut our losses?”  She advocates for the latter.

Business Friendliness on the Decline.

The last minute candidate states that the Frederick County Government is now much more business friendly now than the city is … which is the reverse of where things were just 4 years ago.

This is a direct result of McClement’s lack of leadership, she claims.

“I have gone into Randy’s office no less than 20 times to share specific constituent concerns they have experienced with staff members regarding problems over decisions, approvals and permitting,” Aloi says.  It seems whatever the complaint that “I’ve shared with him, he says he does not see it that way … [he] wants more details before he takes action.”  In reality she considers these statements to be stall tactics, because “he rarely interacts with staff on such matters.”

She offered examples of how the Mayor’s lack of executive engagement with staff has caused constituents to get caught up in thousands of dollars of bureaucratic red tape.

Aloi offered up the 2011 case of Shawn Winpigler, who was stopped in his tracks in his attempt to replace a radio antenna that has been on the roof of his family’s building on East 4th Street since the 1960′s.   In the end Winpigler, after very costly process of filings, hearings and legal action, was able to prevail.

“You just don’t do that to people,” says Aloi.

On top of his lack of leadership, Shelley believes the Mayor has not challenged his administration enough to make an in-depth review of regulatory costs that are laid on new and expanding businesses in the city.  “Many have told me that the City of Frederick is one of the most difficult places to do business with,” she says, “… and that includes Washington DC.”

Aloi believes that the city’s “regulatory” (Euclidean) based zoning program is outdated and inhibits the creativity and design.  The concept of a Form Based code allows for the flexibility needed react to the changes in real estate market and trends in urban planning.  The Form approach works well when serving the needs of the millennial generation and others who provide vital city services.  Form can also preserve the historic nature of the city that Frederick residents cherish.

Changes like these, says Aloi, will stimulate the economic development of Frederick’s downtown, including new construction and more adaptive reuse of existing properties along the Carroll Creek Linear Park.

Her website outlines her background and her contributions to society before she settled into a career “as an analyst in the banking industry.”

What is not noted in her web bio is that her leadership roles in coordinating housing for a part of the 1996 Olympics or overseeing teams for 2000 national census.   While there may be no major role that stands out to prove her skills worthy of leading the city government, she boasts that what she loves the most “is communicating with people and empowering them.”

“I want to ignite the creativity and innovation that has been squished out of” many city staff members, exclaims Aloi.

If energy is all it takes, she has that.  But as a late comer in a crowded field with less than a month before the primaries, she will have to put it to use with all the skills of a ninja super hero to overcome the odds!