While this centurion enjoyed a successful career in insurance, banking and real estate, his legacy will live on through his generous contributions to Frederick County, Maryland 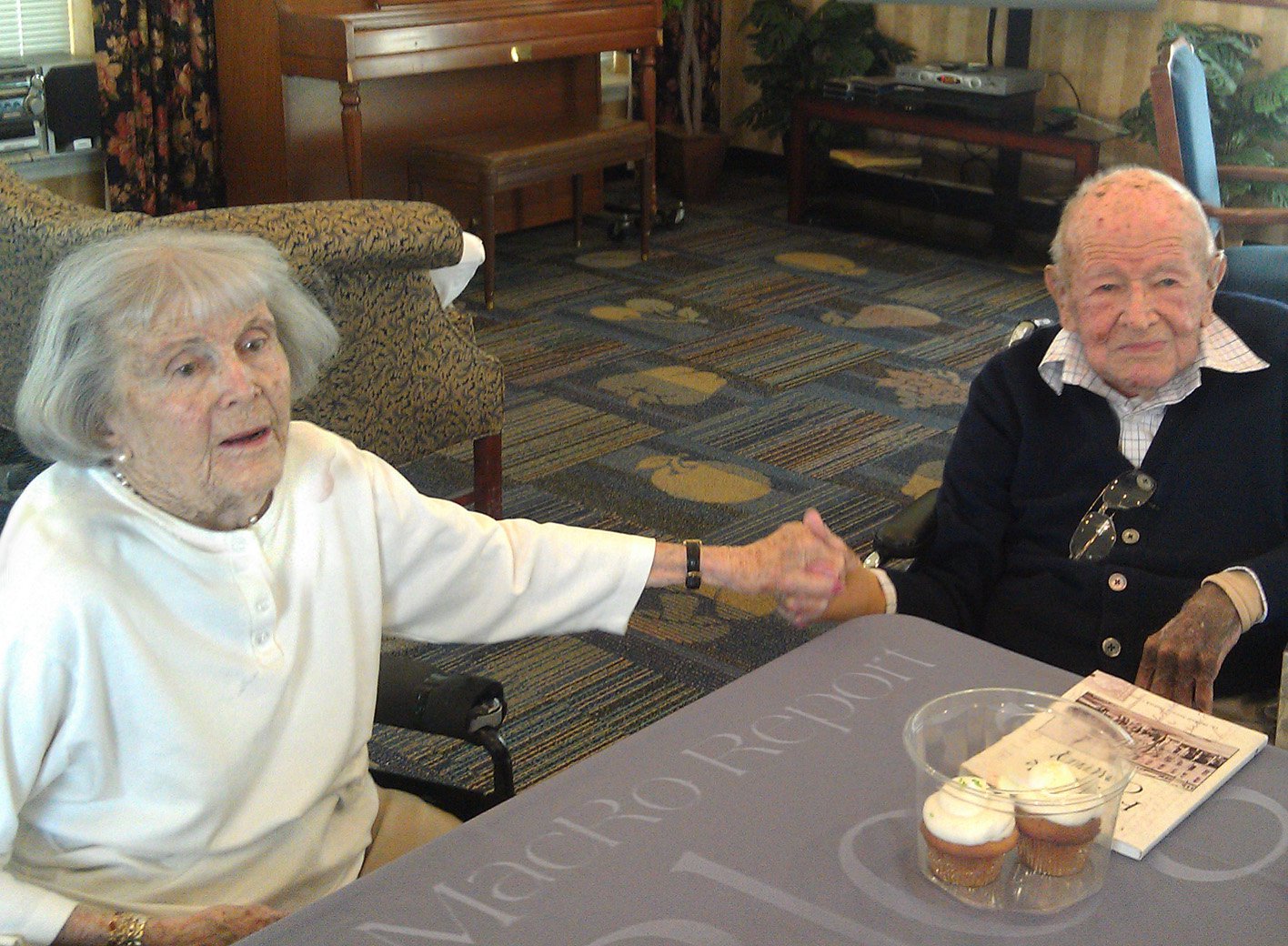 There was no paper on April 27, 1913, because it was a Sunday.  The next day the Frederick News was full of headlines from the weekend events.

For the price of one cent, readers saw a picture of the TALLEST BUILDING FOR BUSINESS IN WORLD AT NIGHT.  Over 80,000 lights were used to illuminate the 57 story Woolworth Building, which 3 days earlier had just opened it doors for occupancy on Broadway in downtown Manhattan.

Locally, a bolt of lightening hit the Episcopal Church bell tower in downtown.  Next door neighbor, Mrs. Schmidt found her bed of sweet peas “Torn Up” by the violent storm.

As they prepared for the upcoming city elections, Republicans were “Begging for Candidates.”

But there was no mention of the birth of M. Robert Ritchie, Jr. on that Sunday in late April.

It was exactly 100 years and 100 days later on August 5, 2013 that he left a very full life that touched so many in the Frederick community over that time.

“MR” as he liked to be called was born just down the street from the traveling Mrs. Jones in Frederick on East Third Street to a family of meager means.  He graduated from Frederick High School, and got a job selling life insurance.  As quoted in the News Post last April his devoted wife of 74 years Harriette Ritchie said, “He would go door to door selling insurance, cold turkey.” 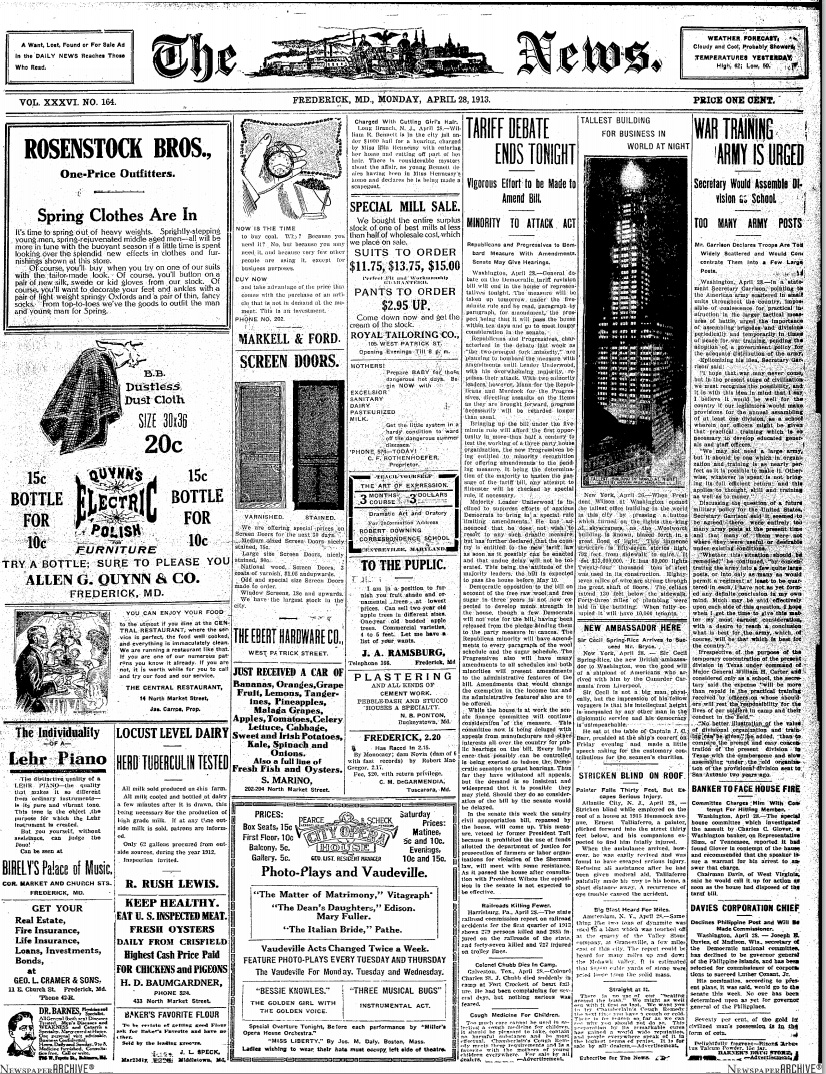 Ritchie eventually started the “Ritchie Associates Insurance Co. and Investors Loan Corp. on a $1 million bank loan and a handshake.” The business grew to 54 offices in several states.

He later sold the business and went about to fulfill a dream of developing Frederick County’s first private country club and golf course.

Ritchie acquired well over 1,000 acres of land in the Ijamsville area, and chose one of the highest points of his real estate holdings to build Holly Hills Country Club.

He managed the facility for a number of years and then sold the club, as well as much of the property immediately surrounding the golf course that was developed as a community of high end residential homes.

He also developed a number of estate lots along Ijamsville Road in the early 1980′s.  About that time he asked me to list the lots for sale.

While he worked with several real estate brokers over the years, when it came time to contemplate the development of his 185 acre homestead, I was once again called to duty.  Nearing its completion this month, the 21 estate lots at the Manor at Holly Hills will forever stand as another monument to one of the last remaining “Titans of Frederick County.”

It was Bob Hooper, good friend and long time adviser to Ritchie, who appropriately tagged him as a “Titan” during that 100th birthday tribute article by Ike Wilson in the News-Post last April.

“He was part of the Greatest Generation,” said Hooper.

To say that M. Robert Ritchie was an interesting character would be an understatement.  One of the best terms that I can use is that he was “fickle” in his dealings … he watched those he hired like a hawk and expected the best out of them.  It wasn’t unusual for Ritchie, however, to be impressed by someone he would meet and quickly shift gears on his staff.

That fickleness, combined with his keen financial skills, often turned out to be quite strategic throughout his business career.  With all the success he enjoyed, he did live a long, very healthy and the good life.  While he enjoyed his cigars and time away from Frederick County on his yacht (often spotted at Pier 66 in Ft Lauderdale, Florida), Ritchie was proud of his roots.

He shared his wealth by giving back to causes he believed would better the quality of life in Frederick County.

Among the Black Angus cattle that were once spotted grazing over the fields of his home farm, it wasn’t unusual to find a bus load of kids from the YMCA spending a day on the property or a tribe of boy scouts setting up camp for an overnight stay.

Betsy Day, the President of the Community Foundation provided me with the following quote:

“I got to know Bob Ritchie as a … donor and trustee, and then as a friend.  He asked good questions at our board meetings, honing in on the financials and the investment projections, because understanding the numbers was one of his true gifts.

“He gave the best [trees and shrubbery] that his nursery had … so that children could play in [the East Third Street Park, and] … he often reminded his fellow trustees that it was tough growing up poor and that scholarships are a true gift to the future of our community.

“He delighted in hearing the accomplishments of my children and sharing the highlights of his own family’s offspring.

“His legacy can be found in the children who benefit from services at Heartly House, play in his old neighborhood of East Third Street Park, and receive scholarships that create opportunities now and in the future.”

Debbie Williams, who founded the Patty Pollatos Fund, offered that, “It was truly a blessing … to have known Mr. Ritchie, but more of a blessing for our community.  He gave back to those in need – especially children – a generous portion of what God had entrusted him with.  He was a strong force and I already miss his laughing eyes.”

Robin L. Jeffs, his dedicated personal assistant and one of his trustees, states that “his sense of humor and his wisdom go unmatched.”

As a business and family man, Jeffs says that this centurion “was driven to succeed in so many areas of life because of his passion for greatness not driven by ego.  He loved his wife Harriette, family and friends.

“Some of his greatest joys were spending time appreciating nature, helping those less fortunate …

“I can say he savored each day and each season.  A beautiful cloud formation would bring a twinkle to his eyes [as he would take his daily] walk in the woods.

She closes by stating that “it would take a book to share all of his grand qualities.”

For a life that spanned 100 years and 100 days, I imagine that his biographer would find that his legacy would become volumes of work.

I too will miss my friend Bob Ritchie, and I hope that this short snippet of a memorial will inspire others to remember and appreciate this fine man and the legacy that he  left to our community.

The author: Rocky Mackintosh, President, MacRo, Ltd., a Land and Commercial Real Estate firm based in Frederick, Maryland. Many of his articles also appear in TheTentacle.com.