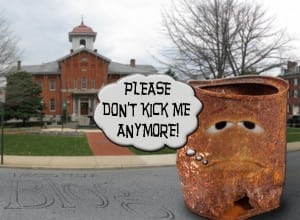 In “Mayor, Mayor, on the Wall, Who’s the Strongest of Them All?” I gave an overview of the candidates for the 2013 City of Frederick mayoral election.  This is the second part of that post.

In follow up, here are the goals I believe the next mayor of Frederick should pursue:

1.  Bring the City of Frederick’s fiscal house to order.

Post-employment benefit and pension obligations: This line item is a tremendous burden on the budgets of municipalities across the country. While the current administration has made adjustments during the past year—by  increasing participant contributions, changing the calculations for retirement age and salary basis, increasing the age of early retirement, and dropping a several hundred thousand into the city’s OPEB and pension funds—it seems to me that there is a lot more work to do to tame this albatross.  This is one Can that can not be kicked any more.

Tax equity between the city and the county: A reasonable effort was made between these two jurisdictions over the issue of the double taxation of city residents and businesses for services provided by the county for the benefit of the city.  While a tax-differential calculation is a good concept, is a $0.04 reduction in property taxes enough to resolve this issue?

Merge city and county services where appropriate: For several years I wondered if there was a cost efficiency to local government if the city were to annex all of Frederick County in under its umbrella, a strategy adopted by many cities throughout the country—Jacksonville, Florida and Indianapolis, Indiana to name two.  But after further review, I realized that creating bigger bureaucracy does not necessarily make for a more efficient government.  That said, the idea of merging the departments of the city and county water and sewer services, among others, could make sense.

We all know about the plans to complete the next phase of the Carroll Creek Linear Park, and hats off to the current administration for finding the funding to do so, but that alone is a mere fresh coat of paint to what else could be done.

Adjust expectations on hotel/conference center: The city has placed a great focus and expense on laying out guideline to attract a hotel/conference center for downtown.  And while studies that have been produced show how a 200 plus room hotel and 15,000 square foot conference center  will bring tremendous economic benefit to downtown, from the commercial real estate developer perspective none of the studies prove something of that size to be a worthy investment risk.  Lowering the sites on what is feasible now will make sense.

Complete airport runway expansion: According to my calculations, nearly $20 million has been invested in tower construction and property acquisition around the airport … not including the costs associated with the extension of Monocacy Boulevard.  That’s more than a big investment.  But still nothing has been done to complete acquisition of the easements required to lengthen the runways.  Imagine the economic benefit and revenue boost the city will gain from expanding Maryland’s second busiest airport!  This may be a challenge giving that the FAA is facing cuts from sequestration, but still worth pursuing.

Resolve unrealistic land use plans: Back in 2005 (I like to refer to the years around that time as the “Fantasy Years”), the City adopted a masterful novel called the Land Management Code.  Upon reflection and subsequent application (or lack thereof), it has become clear that many parts of that volume established unrealistic expectations that do not work for the new world order.  Consider the residential density formula for vacant downtown parcels … from a multifamily development perspective an increase could be warranted for certain core areas of downtown, which could provide the additional benefit of bringing more workforce housing to Frederick.

Better use of parking meters and decks, and onsite parking requirements: I could and should devote an entire blog post on this issue.  Meager efforts have been made in addressing how to generate enough revenue from meters to be able to finance the parking structure planned behind the headquarters of Frederick County Public Schools.  Imagine the incredible boost in property tax revenues the City of Frederick could realize from expanding development along the Carroll Creek … and the secret lies in two things: density and parking.

Resolve the sewer and water tap fees issue: Water and sewer tap fees are a significant hurdle to new service-sector businesses trying to locate downtown. Every commercial real estate agent in Frederick knows this is a common roadblock the stops prospective tenants and buyers cold. Even restaurateurs with the clout of Bryan Voltaggio struggle to overcome the expenses involved in opening new locations downtown.

For far too long the proverbial can has been kicked down the road from City Hall.  Much has been said about what has been accomplished; our next leader must be willing to truly address issues head on as the very fragile recovery continues.

At this point, I will give Mayor Randy the benefit of the doubt as a first term elected official, but I do think that he could have taken a stronger position on several of the issues listed above.  I believe that of this year’s crop of declared and would-be candidates all have the ability to lead.  But as the campaign gets more heated and the blood bath begins, let’s hope the strongest and best leader will emerge!