It seems more often than not people return home from a vacation with a “You Won’t Believe What Happened” story. 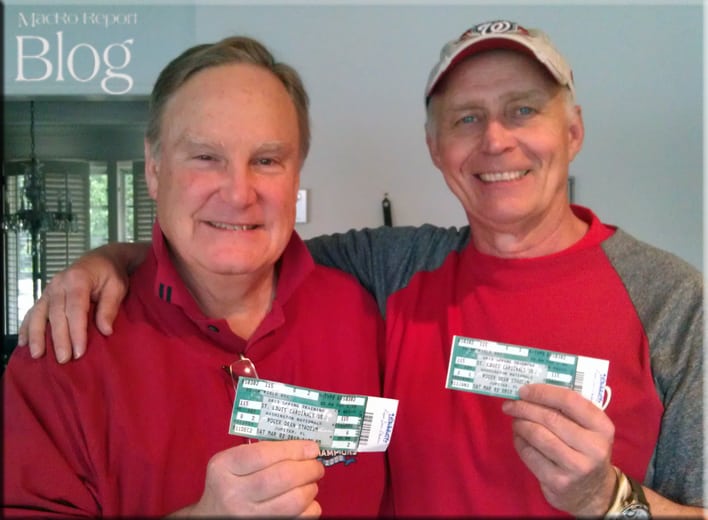 Over that the last few years since I began the MacRo Report Blog, my steady stream of Land and Commercial Real Estate posts is occasionally interrupted with tales of my travels.

Week before last my wife Nancy and I flew to Florida to part-take in what many northerners do this time of year:  Freeload off friends and family.

This year we expanded our freeloading to four destinations in the Sunshine State.  With parents and in-laws on the east coast, we were invited to hang out  with friends in Bonita Springs as well as Sanibel Island.

Nancy and I met up in Ft. Lauderdale, while she was visiting her parents Dick and Sandra Haas.  Upon my arrival we headed across Alligator Alley across the Everglades to our western destinations.

After a few days of west coast freeloading, I dropped Nancy off at Fort Myers international to fly home.  I then headed back east to visit my mother in Vero Beach for a few days of cherished one-on-one Mother-Son time.

To complete my vagabond adventure, I purchased a ticket to a major league baseball spring training game between the Washington Nationals and the St. Louis Cardinals in Jupiter.  It was right on the way back to Ft Lauderdale, where I’d spend my last night with the Haas’s before I caught my flight home.

A few weeks before I was Florida bound, I bumped into an acquaintance of mine from Northern Virginia named Charlie.  I told him that I was headed to Florida soon and hoped to attend at least one Nationals’ Spring Training game between my planned destinations. 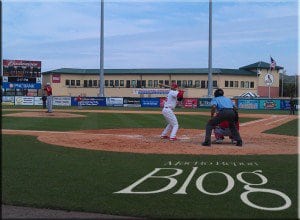 Charlie told me that he would be in Jupiter during that time, and planned to purchase a ticket online for that March 2nd game.  He suggested that I do the same and meet up.  I checked my schedule and saw that it would work out perfectly.

He had no idea where he would sit, and neither did I, so we exchanged phone numbers and agreed that I would call him that day to find out where he was seated.

Well, that day arrived and as I drove south from Vero, I called Charlie a couple of times, only to get his voice mail.

After entering the stadium, I wandered on to my seat …  I was actually pretty excited I had bought a ticket that put me right behind home plate in Section 115, Row 6, Seat 3.

As usual, I arrived a bit late and most of the fans were already in the stadium.  As I looked down Row 6, I saw that Seat 3 was waiting for me … just six rows from the netting.  I excused myself as I squeezed past the a couple of Cardinal fans occupying Seats 1 and 2 — never catching their faces.

Once settled in my seat I decided to place another call to Charlie from my cell … Before I pressed the send button, the man sitting directly in front of me turned around to watch a foul ball rocket over our heads and onto the roof of the press box.

You can imagine how startled I was to find that Charlie was that man in front of me!

Here we are in Roger Dean Stadium next to the campus of Florida Atlantic University which seats over 6,000 fans, and there’s Charlie right there in Seat 3 of Row 5 in Section 115.

After an inning or two we saw that there were a couple of empty seats in Row 3 below us, so I once again asked the people in Seats 2 and 1 to excuse me as I found my out.

Charlie and I spent the rest of the game talking about the prospects of the Nationals repeating their 2012 playoff run this coming season. 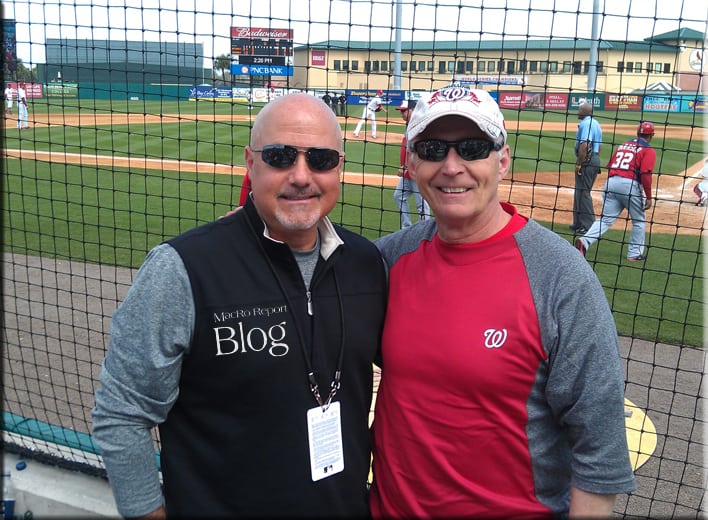 Not only did our team take a sizable early lead, we looked around and noticed the Nats’ General Manager Mike Rizzo sitting just a few seats away from us.

Being the avid fans we are, we walked over chatted a bit with the mastermind of major league baseball’s draft … and I asked Charlie to snap a picture of me with my new buddy Mike.

It was a beautiful day, and the Nats’ 6 -2 victory made the drive south easy … but most of all I couldn’t believe that Charlie and I had randomly purchased our seats one right behind the other.

What are the odds of that, I thought!?!?

I had a chance to check my voice mail, and there was a reply message from Charlie that I missed from earlier that day.

About forty-five minutes later into the drive to my in-laws, Nancy called me from Maryland.

I couldn’t wait to tell her about the amazing coincidence that I experienced at the game, but before I could get started, she blurted out, “You won’t believe what I’m about to tell you!”

Okay, I thought … How can she top my story?

So with more curiosity than enthusiasm I said, “Go ahead, I can’t wait!”

Nancy told me that she had just received a call from her mother, telling her that one of her childhood/family friends and his wife had stopped by on a whim to say Hell-O.

They were vacationing in Florida from the cold weather of the Haas’s original hometown of 45 years ago — St. Louis, Missouri.

Nancy went on to say, that so many years had passed since they’d seen each other, her parents didn’t even recognize Clyde when they answered the knock at the door … but quickly became reacquainted.

Clyde, Nancy reminded me, was her childhood sweetheart … Her first love!  … and she was upset that could couldn’t be there to see him.

I had to interject quickly to ask if he and Jane were happily married … and asked if I should be concerned. 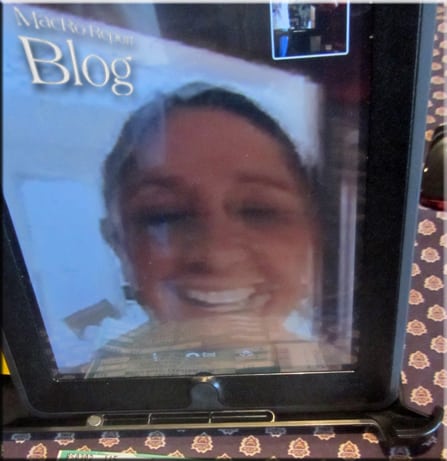 To ease the pain of not being there in person, I suggested that once I arrived I would pull up the FaceTime app on my now famous iPad, so she and Clyde could see what Father Time had done to their childhood complexions.

Of course, I got a typical female response … “But I’m not wearing any make-up!”

“Well, you have about ten minutes to resolve that issue,” I said.

Then she told me the other crazy thing … Clyde and Jane were at that same baseball game I attended in Jupiter!

“Can you believe that?” she said. “What are the chances that the two of you would be at the same game?”

Piggy backing on the day of coincidences, I told Nancy of my amazing seating experience with Charlie.

How odd, I thought after I signed off on my cell and pulled into her parents’ driveway.

I’d seen several pictures of Nancy and Clyde from their preteen years in old Haas family photo albums; so I was able to place the face as we greeted each other.  Within a few minutes, as promised, I called Nancy on her iPhone from my iPad so the two faded star crossed lovers could reconnect.

While they talked, I took Jane aside and asked her if we should be concerned about this reunion.

With Clyde still dawning his Cardinals’ windbreaker and me in my Nats’ t-shirt and cap, I told him about my crazy meet up with my friend Charlie.

We left the iPad on while all of us talked about the strange coincidence of being at the same baseball game in Jupiter  just a couple of hours earlier. 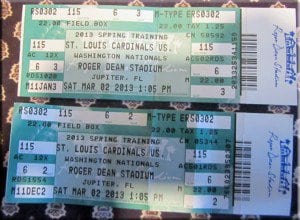 I happened to mention that we were sitting behind home plate …. Blah, blah, blah.

Clyde then said, “That’s funny, we were also seated behind home plate.”

Clyde then asked me which section I was seated in.

“That is where we were sitting! …. What row?” he questioned.

I quickly shot back the number “six.”

With Nancy looking on from my iPad, Clyde then pulled his ticket from his pocket and showed me that he was also seated in Row 6 of Section 115.

I also produced my ticket stub, and we placed the two together on the table in total amazement.

What are the odds of that?

As my mother-in-law said, “This is one for Ripley’s Believe it or Not!”