If MacRo, Ltd. could send a wishlist straight to Santa, these are the top six things we want for Christmas and into the new year. 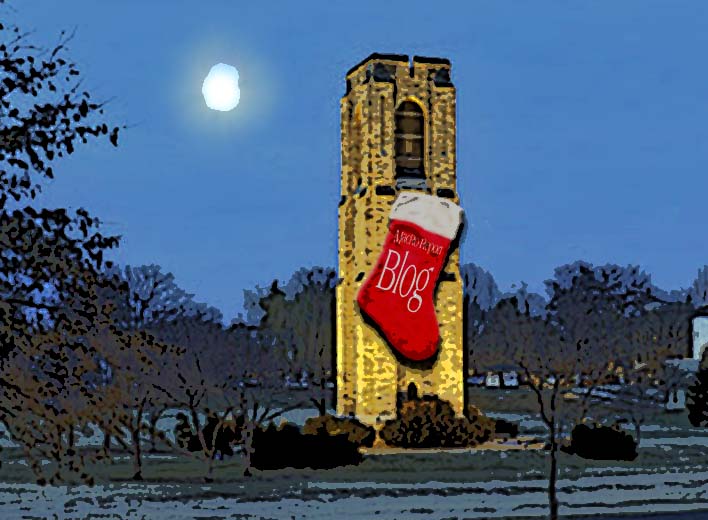 Here it is, almost Christmas, and we are rapidly closing in on another disappointing year for the national and local business climate.  Climbing out of this recession is proving to be a much harder and longer ordeal than most of us had hoped.

I thoroughly enjoyed a house full of grandchildren during the Thanksgiving holidays; they have already expressed to anyone who will listen what they wish from Santa.  Listening to them chatter, I couldn’t help but think wistfully of hanging a few stockings on the Baker Park Carillion in hopes that some of our wishes may come true for our community.

Santa, just in case you are listening, let me get more specific.  Here are a few things I would like to find in Frederick County’s stocking on Christmas morning…

There have been two clear fiscal champions who sit on the Board of Aldermen – Shelley Aloi and Karen Young.  Last month Alderman Carol Krimm clearly jumped on the band wagon by proposing the idea of implementing a , which has drawn full support from the Mayor and all other Aldermen.

This follows other money-saving moves over the past two years to find balance between the City’s revenue and deficit issues – the current trip to New York to save $2 million in debt service costs through refinancing being one of them.

However, there is much more that can be done.  So we wish for the elected officials to collectively find the political will to consider bold moves to make this happen … more to come in future posts.

We have discussed this issue in several previous posts, including “The Real Estate Recession and Ms. Wiles.” The bottom line is that some of the over 500 Frederick County land-owners were unfairly stripped of their zoning with the approval of the 2010 Frederick County Comprehensive Plan.

That move raised the decades-old debate over the relationship between property rights and zoning within Frederick County.  While most are aware of the fact that property rights are not vested in Maryland, as in other states, this ruckus has always been about an issue of fairness.

The focus of this battle of words has recently hit the Frederick News Post, with pieces between County Commissioner President and three members of the .

On second thought, it may be asking for a Christmas miracle to think these guys can find common ground!

As I reported in August in the MacRo post Governor O’Malley’s Plan to Control Maryland Real Estate, the Governor is relentlessly pursuing a Big Brother approach to controlling the planning and zoning decisions made at a local level through PlanMaryland.

By imposing private septic bans and locking down all rural land from development, this plan forces much of the future growth needs of the county to be accommodated through a limited amount of single family dwellings with a strong concentration of higher density development within the confines of our cities and towns.

These bans are also putting significant pressure on the ability of farms to remain profitable.  It is not impossible that agriculture could be “starved out” of Maryland altogether.

Our citizens, and the elected officials who serve them, know best how people want to live, play, and work in Frederick.  We support the recent in their opposition to PlanMaryland.

While wrestling with ways to deal with the glut of foreclosures that are choking Frederick County’s housing market, Frederick County Commissioner Billy Shreve struck upon a brilliant idea—tap foreclosed properties for low-income housing.

We covered this story in our Tentacle post Affordable Housing Capitalizes on Foreclosures.  This program leverages the expertise of low-income builders such as Habitat for Humanity and Interfaith Housing Alliance, and Moderate Priced Dwelling Unit (MPDU) fees from developers to purchase and rehab foreclosures for low-income families.  It is the first program of its kind in the State of Maryland, and Frederick County should be proud to be breaking new ground here.

Recently the Frederick County Board of County Commissioners (BOCC) recognized the advantages of expanding the private operational management of the county owned .  Putting such county services in the hands of third party professionals makes a lot of sense in many ways … while this was a bold step; why not consider selling the facility to a firm that will agree to fulfill the county’s mission in this arena?

It was management guru Tom Peters in his book In Search of Excellence, who coined the phrase “Sticking to the Knitting” … or do what you do best and let others do the rest!

This body of which I am a member is in the process of writing a proposed new form of government for Frederick County.   Like the idea or not, the voters throughout the county should take the time to learn about Charter Home Rule and provide the Charter Board with welcome feedback of any form.

In a November 29, 2011 post that appeared on The Tentacle and our blog, entitled Amortizing Tenant Improvements in a Challenging Real Estate Market, I touched on how the Board of Education (BOE) can create more real estate options for Charter Schools.  By allowing these entities to start off with a longer contract term with the Frederick County Public Schools, the private sector can create an affordable rent model that works for all parties.

The process of educating the public to how a charter organization works has been a long road, and now with well over 1,000 families on waiting lists for the two schools approved this year, it’s time for the BOE to better appreciate the value that this alternative form of education brings to the children of our community.

What is on YOUR wish list for Frederick this year?