This is a reprint of Rocky Mackintosh’s September 20th article in TheTentacle.com. 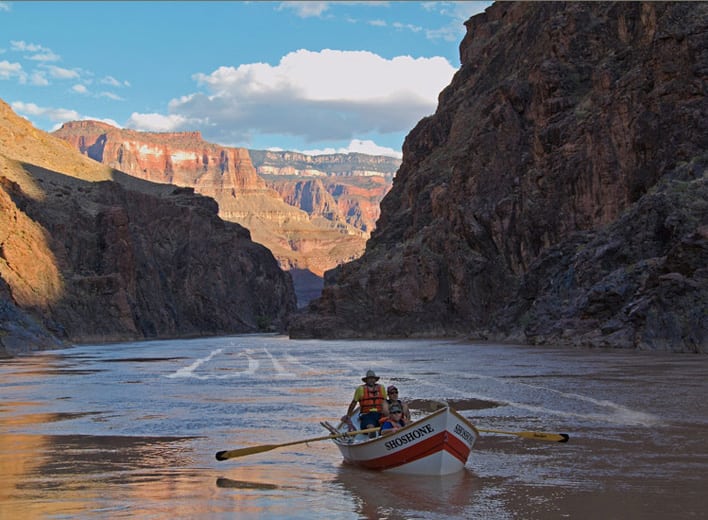 I have decided to change things up this week by writing about a little adventure that I am about to embark on tomorrow.  As I am now officially about to begin my seventh decade of life (for those who were not math majors, that’s 61 years of age), I will be able to check off one more item from my bucket list: a 16 day white water trip down the Colorado River for 225 miles through the Grand Canyon.

But it’s not just me, my wife Nancy, Frederick Memorial Healthcare System‘s president Tom Kleinhanzl and his wife Susan will make the 9.5 mile hike from the South Rim to Phantom Ranch to join our group for the last 10 exhilarating days of the trip.

Nancy and I have part-taken in several white water trips over the years, but this one is dubbed the crème de la crème of river experiences. Having a passion for the outdoors and our National Parks, the Grand Canyon is a place we’ve visited many times at several points along the perimeter along both the North and South Rims. In addition my nephew and I spent enjoyed the challenge of a terrific week long hike into the bowels of the canyon from Grandview Point in 1998.

My trip begins in Flagstaff, Arizona, on Tuesday, September 21st where the six or so guides representing our outfitter O.A.R.S./Grand Canyon Dories gathers the 14 brave souls for orientation and distribution of some essential equipment: water proof bag for personal items, sleeping bag and a coffee cup!

The next day we head north up the river by van for our “put-in” point just 15 miles below the Lake Powell Dam — a very historical spot known as Lee’s Ferry which was established as a crossing for Mormon colonists in 1864 as they traveled west into Utah.

Our guides are well versed in the history and geology of the region. While this trip will be an exciting outdoor adventure of hiking and tackling some of the wildest white water in the world, it is equally enjoyable to become more educated about the evolution of the natural treasure, its ancient Indian activity, and the impact that modern man has had on the region – beginning with Pedro de Cardenas who discovered the abyss in 1540, which was declared by his leader Francisco Vàsquez de Coronado as having no value.

The vessel of choice will be a dory. This is not a large 7 person inflatable raft which is the most often and more flexible method of travel … and it is surely not a canoe! Dories are lightweight wooden boats with high sides, flat bottoms and sharp bows. They average about 16 to 23 feet in length and are about the closet modern vessel to that of the Canyon’s first river expeditioner Major John Wesley Powell. This one-armed Union civil war veteran used the wooden boat to explore the Colorado River through the Canyon on his amazing 1868 expedition. For sure the experience of tackling the rapids will be a bit enhanced over that of the inflatable raft.

A capsulated description of the trip is described on the O.A.R.S. website stating that it offers “all the scenery, side canyons and whitewater excitement … with the glories of Marble Canyon, the mysteries of the Inner Gorge, terrific side hikes and Indian ruins, crystalline creeks and waterfalls, cactus gardens and whitewater galore. The Colorado’s whitewater covers the full spectrum of foaming ripples to the notorious churning roar of Lava Falls. [There is] plenty of time to explore the numerous side canyons which crisscross this magnificent region, each having it’s own unique attractions, just waiting to be discovered by foot. Along the way we may encounter … wildlife including bighorn sheep, deer, coyote and a variety of birds.”

If you’ve ever enjoyed a roller coaster ride, hitting Class 10 rapids (while Class 5 is the highest, the Grand Canyon has its own rating system of classifying rapids) is the ultimate rolling experience. Hermit Rapid and Lava Falls are two of the most famous. The former ranges from a Class 6 to 7 with a 10 foot drop, and the latter takes the dories on a 15 foot drop through a Class 10 experience. I can’t wait!

Our trip will end at Diamond Creek just 75 miles north of the Hoover Dam. Along this small tributary into the Grand Canyon, we’ll ascend 4,600 feet of elevation along a gravel road through the Hualapai Indian Reservation to return to Flagstaff.

So, while I will have my digital camera, all other technology and communication devices — including my Crackberry — will be put aside in exchange for sleeping out under a black sky filled with a galaxy of natural light that has more shooting stars than you can imagine.

Ah, Solitude! … and a bit of excitement in real estate’s grand abyss!