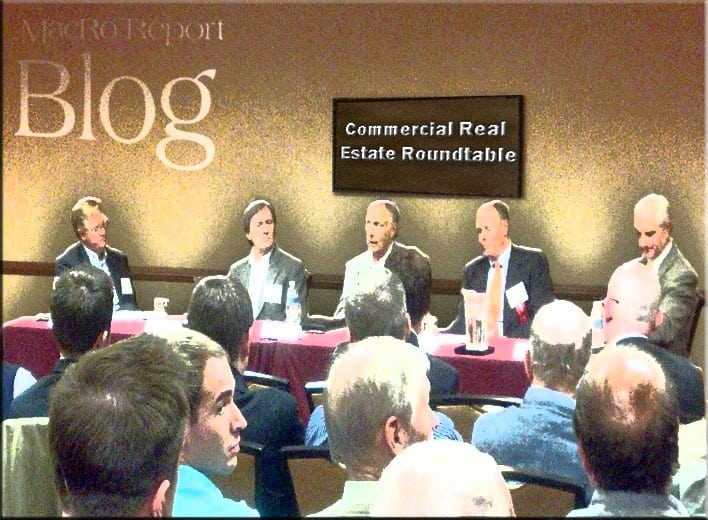 Note:  This popular blog post originally ran on January 30, 2013.  MacRo Report Blog is sharing it again while Rocky is on vacation.  Look for a “Tracking My Droid” blog post highlighting his vacation (mis)adventures in the near future!

The Frederick County Office of Economic Development recently hosted a round-table discussion about the health and future of Frederick’s commercial real estate market, and I was invited to be a panelist.

I was joined by several esteemed colleagues, including:

Following is a snapshot of the main points of our debate.

Karl Morris of Matan started the discussion by providing statistics that throws activity inFrederick’s commercial market—before and after the recession hit—into stark relief:

Apartments: The Next Big Thing is Already Yesterday’s News

Apartment (multifamily) projects have exploded in theU.S. as distressed and foreclosed homeowners, along with skittish young adults, seek rental housing in droves.  Apartment vacancies are at a low 3.5% inFrederick.

Ausherman is finding a surprising niche market for apartments in Whittier:  divorcees.  Projects on the south side of Frederick, however, are drawing a younger market segment.

Panelists agreed that anyone trying to start a multifamily project at this point will be too late to the game to enjoy significant returns.  The Frederick market will be saturated by the time those units would hit the market.

Karl Morris noted during this discussion that while housing appears to be recovering (at last), it’s important to remember that there are still a great many people in the U.S. who can’t finance a home or are afraid to invest in homeownership.

With Bechtel moving 625 employees from Frederick to Northern Virginia, the office market is left with an even bigger hole to fill: Frederick now has a total of 800,000 square feet of unoccupied office space in the southern end of town alone.

Gary Large of Ausherman noted that with office rents in Rockville so low now, that a significantly higher number of Frederick residents are driving south to work than were prior to the recession.

The panelists agreed that Maryland is becoming less and less attractive to large national tenants, who more often than not choose to locate in Virginia instead of Maryland.  If there isn’t a significant effort by O’Malley and his team to effectively recruit new employers, the office vacancy rates in Frederick will remain high.  As Gary noted, “We can’t fill 3 million square feet of unoccupied office space with companies from Frederick.”

It doesn’t help that office space use overall is evolving, as more and more employers are hiring employees who work from their homes.

Flex is the Future

A member of the audience asked a great question:  “What happens to flex if we aren’t making stuff anymore?”

Danny Severn, a Sales Representative from St. John Properties shared that about 50-60% of their flex shells are now ultimately fitted out as office space versus for industrial or warehouse use.

Flex shells are much cheaper to rent and to finish than traditional Class A office space, and many businesses feel compelled to choose this no-frills option in an uncertain economy.

Karl Morris shared that Matan is banking on the “build to suit” flex lots like those in Wedgewood on the south side of town.  From an owner-user perspective, these properties are “shovel ready”—infrastructure is already in place to break ground, including water, sewer, traffic, and APFO.  Riverside Research Park is another example of this.

Frederick is a Safe Bet

The panel noted several reasons to be very optimistic about the future of Frederick’s commercial real estate market:

Ft. Detrick: While BRAC hasn’t brought as many jobs as hoped for, the improving economy may bring a resurgence of contractors and start-ups to the area related to Ft.Detrick.  The old buildings and labs at Ft.Detrick are very expensive to retro-fit, which means there is a good chance employers will choose to build out spaces in nearby Riverside Research Park instead.

Health and Bio Tech: Frederick has wisely cultivated a niche of health and biotech companies.  No one is arguing that growth in these industries has been—and should continue to be—explosive.  (The trick will be keeping these companies here once they outgrow start-up phase and become substantial employers.)

Frederick is a Jewel:  Gary Large concluded the discussions with this thought:  “Frederick still holds the quality of life card.”  And he is right. Frederick is the complete package:  tranquil countryside, excellent schools, and a beautiful, vibrant downtown with a thriving arts culture and world-class restaurants.

So, to sum it all up: if our governor will work in earnest to improve the balance between government and private employers in Maryland, Frederick’s commercial real estate market is poised to enter a sustained recovery.