No doubt that mayoral candidate Karen Young will wear out more than just a few pair of shoes over the next few months in what is clearly shaping up to be the race of her political life! 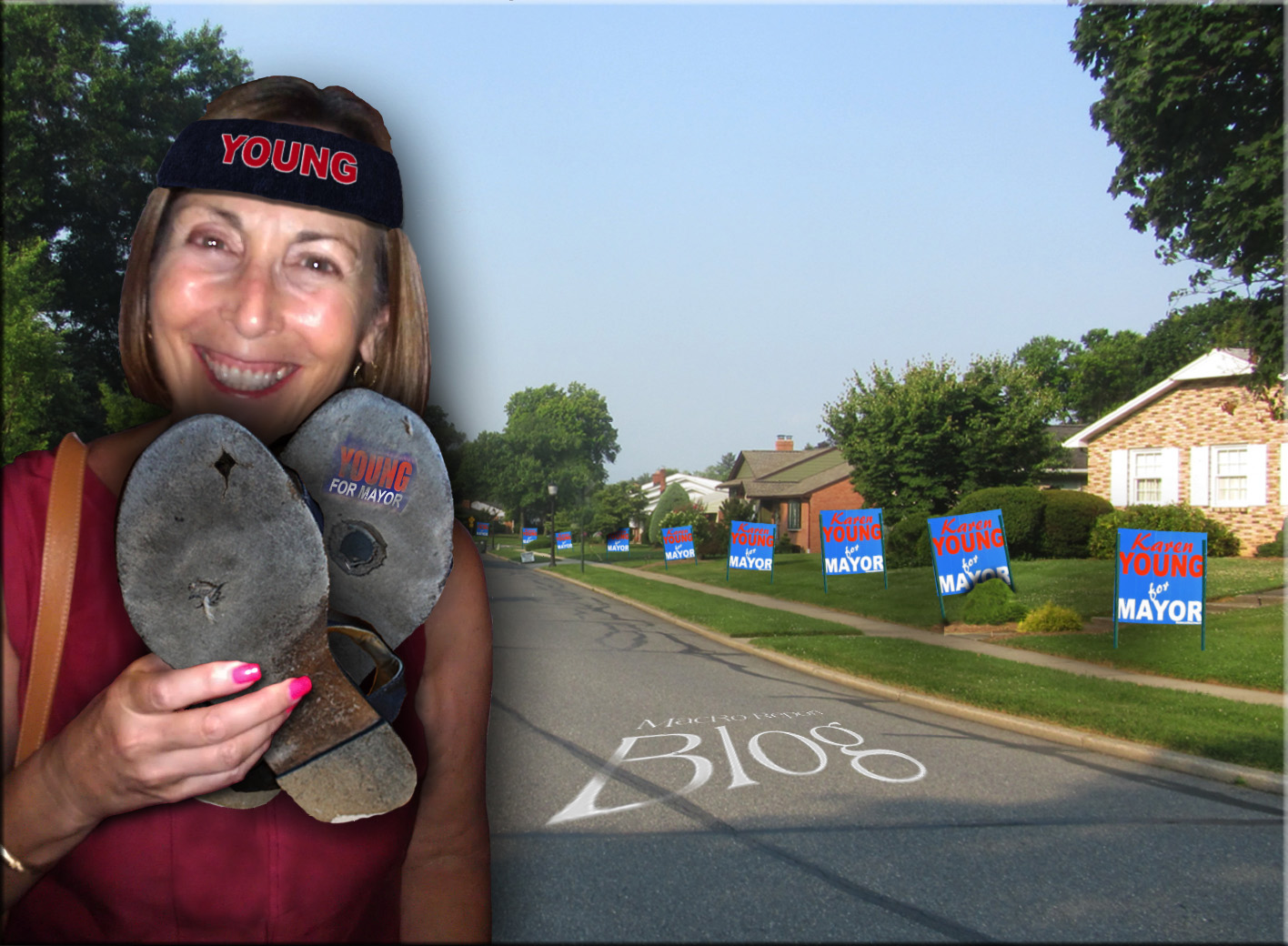 From the outside looking in, it would appear the Young family has a powerful lock on Frederick County politics.  It seems like there has hardly been a local political campaign in Frederick County during since 1969 that a Young hasn’t run for some political office.

Karen Lewis Young is wife of Ron Young the current Maryland State Senator of District 3 and former mayor of the City of Frederick from 1973 to 1989 … among other political offices he has sought, been elected and/or appointed to over the last 44 years.

In addition Ron’s second son Brad currently serves as an elected member of the Frederick County Board of Education.

… and then there is the widely known local radio celebrity and possible gubernatorial seeking son Blaine, who is the current (and last) president of the Frederick County Board of County Commissioners. The younger of all these political Young’s broke from the Democratic Party family tradition years ago to follow a much more conservative path.

But this article is not about the Young men, it is about Karen, who began her political career in 2010 when she won a seat on the Board of Aldermen of the City of Frederick.

Her term had barely begun before she had “mastered” the fiscal and operational details of Frederick City government and began pursuing an agenda to bring about efficiencies on both levels and to nurture the city’s priority economic development projects.

Karen arrived in Frederick in 1996 where she accepted the position of the Chief Marketing Officer of Farmer’s and Mechanics National Bank. Holding many of the ABC’s of degrees (B.A. in History from Franklin & Marshall College and an M.A. in American History and M.B.A. with a Marketing concentration from Columbia University), her pre-Frederick life involved significant roles in finance and management with several major financial institutions.

For those who get to know Karen well, they quickly learn that studying the numbers and deeply researching the issues is right up her alley.  It is not unusual for her constituents to receive an evening phone call or past-midnight email with feedback on an issue that was brought to her attention earlier that day.

Being the conservative that I am, it is a unique occurrence for me to find a Democrat who preaches fiscal responsibility … and means it!

During Young’s tenure as an alderman, she lists the following on her website among her achievements … and please take note of the links to the impressive support material that is covered with her fingerprints:

Karen has made no secret of the fact that she feels Frederick’s current mayor Randy McClement has not been aggressive enough on budget issues or economic development among many other things … and she says that there is much work yet to be done.  That thorough website of her’s lays out a clear platform of issues and goals for the City of Frederick.

On the campaign trail there is strong evidence that since her announcement in January of this year, Young has been hard at work knocking on doors and putting sign up all over the city.  Even Mayor McClement has taken notice … he told me a month or so ago that he was somewhat perplexed as to why certain businesses that previously gave him support are now allowing Young to install signs on their property.  Go figure?

Candidate Karen’s first hurdle on he road to City Hall is fellow Democrat Galen Clagett, the current Maryland State Delegate representing District 3A that spreads across much of the City of Frederick.  While I consider both good friends of mine, I doubt that either would say the same of the other.  With Clagett’s track record of bringing home bacon from Annapolis, he has earned a lot of respect from his constituents.

To counter that, Young has her own well-healed spousal weapon from Maryland’s capitol city, who probably has never campaigned harder in his life as he as been doing for her … few would doubt that statement!

Does Karen Young have any faults?  According to her critics, there are concerns that because she is so thorough in research and analysis, she may have a tendency to get caught in the weeds of the issues and thereby find it hard to delegate to staff, or suffer from lengthy deliberation on matters that require timely decisions … stating that such things “require more study.”  Young’s reply: her management and leadership experience has taught her to follow the 80/20 rule — 80% focus on the big picture and 20% on the details.

Even though her resume boasts of deep management experience, those same critics express doubt that her style will work in City Hall … and not surprisingly that is what critics will say in very competitive political campaigns!

Many state that husband Ron, whose true claim to fame was envisioning the 20th century Carroll Creek eyesore as a vibrant focal point linear park, will bring tremendous depth to Karen ability to lead Frederick into the future.  Others express concern that many of his liberal positions on issues decided in Annapolis (Dream Act, gas tax, and gun control, to name a few) may be a negative for many of Frederick’s more conservative Democratic voters in the general election.

For some reason I still don’t understand, as chairman of Metropolitan Washington Council of Governments (COG), Young allowed the regional body to get wrapped up political controversy by supporting Maryland’s gun control legislation.  Once the heat was turned up by several rural counties in gun proud Virginia, as well as our own Frederick County, she moved quickly to have COG overwhelmingly nullify their previous position.

On July 7, 2013 (less than 2 weeks ago) the Frederick Gorilla Magazine co-sponsored a Mayoral Candidate round-table discussion that was held that the Faux School in Frederick.   Of the now seven candidates who have taken on the mayoral challenge — McClement (R), Holtzinger (R), Aloi (R), Dougherty (I), Clagett (D), Hirsch (D) and Young (D) — all but late comer Hirsch participated in the rapid fire Q&A session.  The personality and style of each candidate gave the voters a taste how their soundbites will resonate in future clashes.

For Young, she did well … not as quick on the draw as others, but she clearly provided the audience with well thought out and very creditable points.

There is no doubt that the hard campaigning Young team will make Karen a strong contender in this election.  She has an encyclopedic understanding of the city’s operations and budgets, her campaign platform is clearly stated and well-prioritized. She displays a serious passion in her effort and is playing to win this election.

All that said with less than 8,000 (of over 30,000 eligible) voters who went to the polls in the 2009 general election … that succeeded a far lesser in the primary, this is truly anybody’s race!

Clearly with all the Young Blood left on the campaign trail thus far, Karen has a lot more determination left in her tank … and that alone will keep this a close race!