It is interesting how politics play into decision making, or in the case of our Board of Frederick County Commissioners, how voices can make them eat humble pie… after they set off a hand grenade! 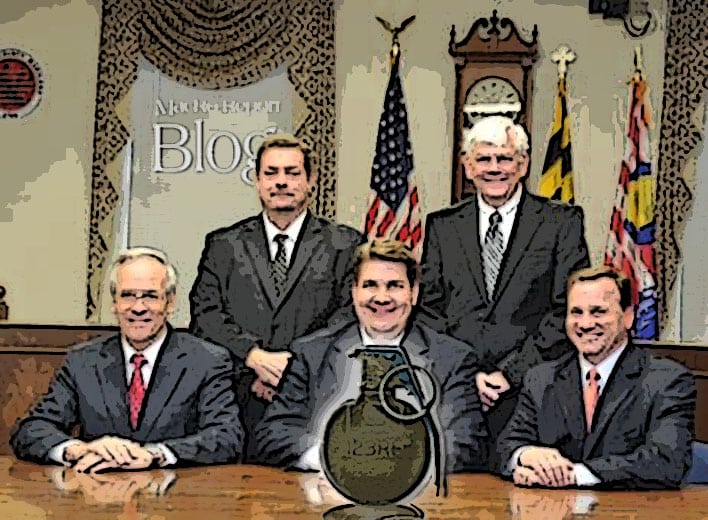 It is a rare occurrence when a group of elected officials, led by an individual who has pledged not to run for office again, in essence listen to their constituents and move away from the controversial Porter privatization proposal and instead take a fresh look at how to approach the problem.

The voices were mostly lead by Frederick Government employees and gladly given support by a number of individuals who were not happy about the Republican sweep in last year’s county election.  The crowds were large at the three public hearings and the pitch was full of fear and anger over what was perceived as a less than compassionate approach to bringing county expenses under control.

As the fervor grew over the weeks since the report was about to be released to the public, skepticism increased over what Commissioner President Blaine Young and his majority were “really” up to.  Were they trying to dismantle government as we knew it?  Is the development community behind a secret plan to take over Winchester Hall?  Was all the hype about a looming $31 million structural deficit just a big scam?

Last week I received a message via Facebook from someone who was out front in organizing the impactful rallies before and the turnout during the aforementioned public hearings.  The message was quite telling of the concern and anger that she felt:

You all and the business community need to step up to the plate. It is in your best interests. The direction we are headed will make Frederick a place no business/corporation would consider opening in, and any homebuyer would not want to invest in … especially if they had children. This board is not “pro-business” and they will ruin us economically. We are sending all the wrong signals on all the things businesses and homebuyers look at … And I do not mean to sound mad, but frankly I am frustrated at the monster you all have helped to create… and hope you will be part of the solution…

Obviously, there is a finger that is pointed right at me … my response:

As to me stepping up to the plate, clearly, you haven”t read my two blog posts on … [the] failed effort on privatization. I have personally expressed these … views to Young and other members. Do I like the concept of privatization? Yes, but in my opinion these guys made a major miscalculation.

But was it a miscalculation by Commissioner Young?  Was it his intention all along to drop a hand grenade in the middle of Winchester Hall to get the attention of everyone from Sabillasville to Monrovia?

Change is an amazing thing, as noted in previous posts on The Tentacle and the MacRo Report Blog.  When it appears to come in a very heavy dose, it can rally forces for and against.  In this case, there was a better way to introduce the concept on a grander scale … but maybe there is a silver lining in the way things transpired.

Consider the fact that on Thursday, August 4th, after ditching the full blown Porter plan, county officials offered up a new plan to approach “money saving measures such as outsourcing and consolidation of government services” as reported by the .

Acting county manager David Dunn stated, “We want to take a slow and very intelligent approach to this.”

A 10 member “Partnership and Efficiencies Committee” has been established and is made up of division heads among others.  In addition, another group consisting of county employees and county residents will be appointed to review the committee’s findings.

So after all the hoopla, it appears that things are on a path that should have been taken from the start.  Even dissenting Commissioner David Gray appears to be satisfied with this approach.

Consequently there is a bigger mountain to climb to win over public support for the concept of privatization. But, frankly, for something this big, that is the way it should be.