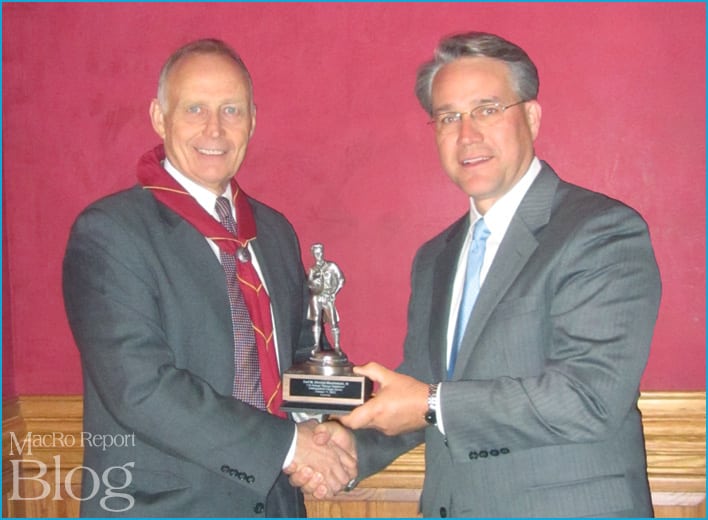 Each year the local Boy Scouts of America communities in the Appalachian Trail District and Catoctin Mountain Districts join with the Frederick County community to honor a citizen who exemplifies the Scout ethos of service to others.

The evening is a celebration of service and Scouting, as well as a major fundraising event for both Districts.

This year, the dinner was held on Thursday, October 11th at the Holiday Inn Conference Center and raised over $70,000 for the cause of scouting in Frederick County.

The proceeds from the event enable young men of the greater Frederick area benefit from attending scouting functions, camping, training adult leaders, and supporting individual scouting units.  For over 100 years, the National Capital Area Council of the Boy Scouts of America has been preparing young people to make ethical and moral choices over their lifetime by instilling in them the values of the Scout oath and Law.

The program included excellent presentations of  ”What Scouting Means to Me” by Christopher Platt of Crew 394 and Alexis Ramsey of Crew 121.

President and CEO of FMH-Frederick Regional Health System. Tom Kleinhanzl, served as the chairman of the event.  In his statement of recognition of the honoree he stated the following:

“I had the good fortune and luck to have been coupled with Rocky early in his tenure as an FMH Board member and in my tenure as President of FMH… He filled virtually every leadership role possible during his recent eight year tenure on our Board.

“Most importantly, while associated with the FMH Board, Rocky fostered a sense of engagement, always putting first the broader communities’ needs first in his thoughts, words, and deeds … [he] has a keen appreciation and understanding of the fine line between a board’s fiduciary responsibility and micromanagement.  He was the consummate Chairman, leading us towards a vision that our organization, and more importantly, our community, could be proud.”

Mr. Kleinhanzl added a quote from Dr. Gregory Powell, referring to Rocky as “an agent of change. He has the uncanny ability to see what needs attention when others are either content with the status-quo or frustrated but unsure why … he looks at the big picture and finds the most advantageous ways to put change in motion. This usually involves educating and training people to see problems differently and approach them more effectively. The combination of urgency to the task and compassion for the people involved makes Rocky an admired leader.”

Past recipients of the Delaplaine Distinguished Citizen Award are well known to the Frederick community:

The primary sponsors of the event included: