It’s called PlanMaryland – It is a comprehensive state wide land use plan presented beautifully on a website that gives the visitor a real warm and fuzzy feeling of protection from evil real estate development interests. 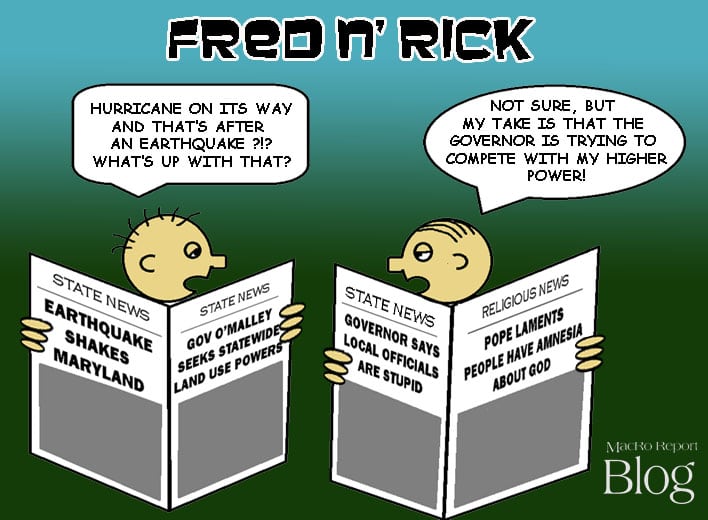 Dig into it deeper and it’s all about our state government being granted the powers to usurp the land use authority of county, city and town officials in the name of protecting the land and its citizens against “stupid decisions” that they may make (as our Governor has said).

This is especially important in rural counties west of Baltimore and on the Eastern Shore of Maryland.

Once again the elitism of the environmental and land conservation forces are showing their true colors by dressing up a proposed state wide land use plan that essentially says “Big Brother” knows better than those “Stupid” hicks in the sticks.

The MacRo Report Blog raised a red flag over PlanMaryland back on October 4, 2010 in a piece entitled Does Mr. O’Malley have a Septic Problem? While we outlined the entire “Plan” as it was developed at that point, the focus was on what we saw as a means of declaring rural septic systems to be bad for the environment — all in the name stopping sprawl in rural areas.

Then in February of this year, this prediction became reality as we discussed in Farmland and Rural Building Lots face new threats from EPA. O’Malley revealed at that time his vision to ban septic systems throughout much of the state as a means of saving the Chesapeake Bay from excessive amounts of nitrogen that leach into the soil through septic drain fields.  With the aide of the EPA it was declared that Maryland must be put on a “Pollution Diet.”

Of course many local community and government leaders, as well as state representatives came to the conclusion that this radical plan was nothing more than the state seeking a method to take control of land use planning throughout the state.

The proposed legislation that was released stated that despite the state’s efforts in 1997 to direct “growth in and around existing cities and towns … 78% of statewide acreage associated with residential development has been located out of [these] Priority Funding Areas.”

To put it another way, former Governor Parris Glendening’s highly touted Smart Growth Plan that attempted to socially engineer the type and location of housing that people should live in throughout Maryland, didn’t have enough teeth in it.  Not to mention the fact that while it was often attempted in the non-metropolitan counties of Maryland, it was almost always rejected by neighboring communities made up of single family residents who claimed NIMBY (Not In My Back Yard) to such high density land development projects.

But the dream lives on within the core of the Maryland’s land planning and environmental bureaucracies.

So after the defeat of Republican Governor Erhlich, O’Malley decided to dust off the failed Smart Growth initiative, change the name and find a way to give Big Brother more teeth and cloak him in sheep’s clothing – thusPlanMaryland was born.

Over the last couple of weeks, Mr. O’Malley has now revealed those teeth with the full revelation of his grand plan.

In an article entitled , the Editors of the Frederick News Post quoted our state leader as saying if the State doesn’t like land use decisions of local communities, it may retaliate by withholding funding for schools, roads and other essential services unless the community complies.  “This is not a law that prohibits counties from making ‘Stupid’ decisions,” said the Governor. “But we’re not going to subsidize it anymore.”

Why would such “Stupid” people ever want to make a decision on their own without first receiving the blessings from the Higher Power of the all wise and all knowing Governor and His people?

The desire to preserve rural lands is a worthy one for sure, and such efforts are vital to a well balanced community.  But aren”t these decisions best left to local governments that are most intimately familiar with the people,  the land and the comprehensive plan it lays out for itself?

In speaking with BOCC (Frederick County Commissioner) member C. Paul Smith, he stated that at last week’s Maryland Association of Counties (MACO) meeting the Governor through deliberate vagueness made very clear his determination to have the state control land use.

When asked by Board President Blaine Young if this was Mr. O’Malley’s intention, he consistently avoided a direct answer, said Smith.  “They kind of really went at it … but in a professional way,” he said.  Young ended by saying to the Governor, “You never really answered the question.”

“And he never did,” said Smith.

Not only is this vagueness apparent in Mr. O’Malley’s verbal presentation, but also in the written plan according to Smith.

Keeping language vague leaves things open for interpretation — and that is great for bureaucrats!

The commissioner drafted a five page memorandum outlining his concerns about the PlanMaryland proposal on August 16th.  From his interpretation it seems pretty clear that the ultimate goal is for the state to eventually eliminate the use of private septic systems throughout the state and lock down all rural lands (zoned agricultural, conservation, rural reserve, etc.) as no longer usable for any residential or other commercial developable uses.

“With another one million people expected to move in to the state in the 25 years, the Governor is saying rural lands are off limits … leaving the only way to accommodate that kind of growth by promoting new multifamily housing (apartments, condos and town houses)  in and around the cities and towns,” said Smith. “A future for new single family housing within Maryland is clearly not part of his plan.”

In addition this could conveniently wipe out the need for any state and local agricultural and land preservation funding programs – no longer will there be a difference in values between farm or rural use and subdivision potential.

Since last week’s meeting, a number of the county leaders – as many as 19 out of the 23 in Maryland – have beenagainst O’Malley’s plan according to Commissioner Billy Shreve.  Other organizations like the Maryland Farm Bureau and possible municipal leaders are also ready to jump on board against this “Wacky Idea” said Shreve.

There is no question that the Governor is relentlessly pursuing a Big Brother approach to controlling the planning and zoning decisions made at a local level.

Obviuosly the Gov is not happy with the results of the last legislative session where most of  his “key environmental initiatives — including legislation to limit septic systems and build an offshore wind farm — failed to win approval in the General Assembly,” according to the Baltimore Sun.  So why not just repackage all this and give it a warm and fuzzy presentation.

One would have to be really “Stupid” to fall for that one!