How does the outcome of a Board of Education primary election have anything to do with land & commercial real estate in Frederick County? 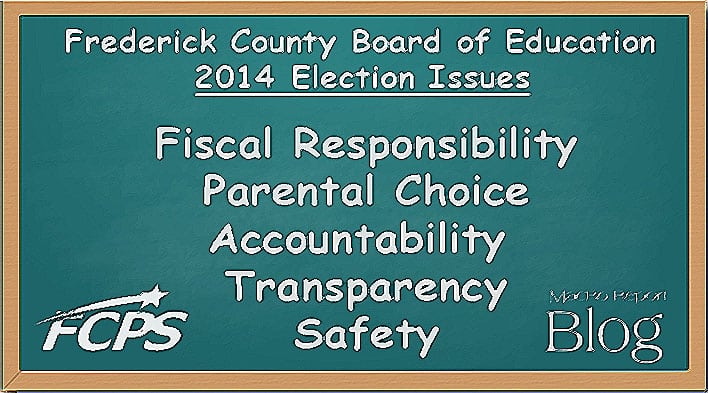 The answer is very simple: A whole lot!

To save you time in doing the math, that totals $539,697,886 in county government approved funding. Put another way, that is over one half of a billion dollars county in real estate property taxes.

Consider that in 2013 there were 92,347 households and about 25,000 businesses within the boundaries of this county. If we figure that each of these are located a parcel of real estate (not sure where else they would be found!), the budgeted tax payer amount for each of these units totals over $4,500, whether the individuals have children or not.

Based upon adjusted statistics from the National Center for Education Statistics the average cost to publicly educate a student in the United States is about $11,800 (2010-2011 average of $11,153 compounded by 1.8% per year). So Frederick County is paying about 10% more than the national average.

Don’t get me wrong here, our children are a precious commodity to the people of Frederick County and making an investment in their education is vital to the future of our community and nation. So I am not challenging any of the above budget numbers.

That stated, all Frederick County voters should pay close attention the weight of the responsibilities that are placed on our elected BOE members. All too often voters don’t take the time to pay attention the individuals who file for these races, and then just follow the recommendations of the local teachers’ union.

With all due respect to my Facebook friend Gary Brennan, President of the Frederick County Teachers Association (FCTA), he has done a great job over the years looking out for the union he represents. In addition he has generally had a very strong influence on how the FCPS budget is crafted for the last several years.

Over the years I have paid close attention to many aspects Frederick County Public Schools, and I generally give them good grades, but it is always good the elect candidates to the Board of Education who are not afraid of challenging the education bureaucracy and the union’s strong lobby.

The candidates for the Frederick County Board of Education run on a non-partisan ballot, so all will appear on both the Democratic and Republican ballots.

Three of my endorsements go to incumbents who have proven their worth while in office: Brad Young, April Miller and Colleen Cusimano.

Jonathan Carothers is my fourth choice. He is new to local politics, but well versed in the issues surrounding the issues facing the BOE.

I believe each of these candidates to be the best for the five qualities I look for to lead the Frederick County Board of Education: Fiscally Responsible, Provide Parents with Educational Choices, Willing to hold themselves and FCPS accountable for their actions, Provide full transparency in all decisions that are made, and keep our student safe.

You don’t have to take my word for these endorsements, check all these hopefuls out for yourself … and then VOTE!

The author: Rocky Mackintosh, President, MacRo, Ltd., a Land and Commercial Real Estate firm based in Frederick, Maryland. He has been an active member of the Frederick, Maryland community for over four decades.  He has served as chairman of the board of Frederick Memorial Hospital, as a member of the Frederick County Charter Board from 2010 to 2012 and the Board of Directors of the Community Foundation of Frederick County … to name a few.