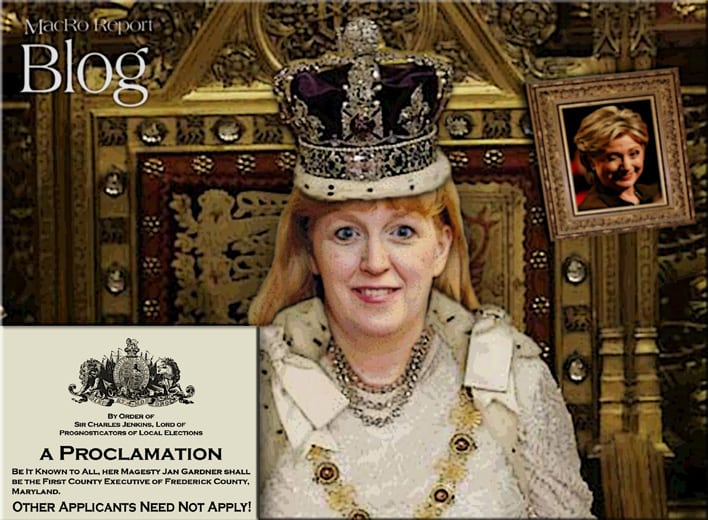 I must say that I do love politics at all levels – State, Local, National and International.  Admittedly I will also confess that although I am avidly passionate about sports, especially the NFL’s Washington Redskins and MLB’s Washington Nationals, there is something about those who seek the power of elected office, the games they play and the things they say that I really enjoy.

I guess that makes me one of those political junkies … and to be associated with that bunch, well, one must have some serious issues!

The dust has barely settled from the recent City elections, and here we are already kicking off the County candidate contest for the opportunity to govern under Charter Home Rule for Frederick County.

Voted in by an overwhelming majority in November of 2012, the structure of local government will switch from the current County Commissioner format with five elected officials to that of a more executive platform.  Charter will provide the county with the opportunity to have a County Executive and seven elected County Council members.

The deadline for filing is less than ninety days away!

Over the last  five election cycles the fickle voters of Frederick County have taken turns throwing out administrations that support housing growth and then later canning their once supported no-growther slate just four years later.  It has happened so many times that it has to have dizzied any political junkie.

So here we are at the dawn of the next cycle, where current President of Frederick’s County Commissioners, Republican Blaine Young successfully earned the opportunity to overturn no-growth policies of the prior board, lead by Democrat Jan Gardner.  And like it or not that is the platform he and a majority of his fellow commissioners ran on and have executed during the last three years.

By what seems to be the natural swing of the pendulum, one might guess that it’s time for another no-growth administration to be chosen by the flip flopping voters of Frederick County.

Young has not decided as to whether he will take the plunge to throw his hat into the race for County Executive, but we do know that he has been seriously considering such a play.  He states that he will make his decision after the New Year celebration confetti covers all four corners of Times Square.

Gardner on the other hand, after leaving office headed east to serve as State Director for U.S. Senator Barbara Mikulski.  Late last month, she announced that she had filed to run for the County Executive position.

Within both parties, any number of names have been bantered around as possible candidates in the County Executive race.  Thus far, only long time County Commissioner David Gray has also decided to step forward.

Gray has been a strong ally of Gardner’s for years and was once was a Democrat, but found the only way for him to win elections was to run as a Republican.

I could pontificate for hours on why David is in the race, but not here.  This post is about the so-called inevitable first Frederick County Executive and her anointer Charles Jenkins.

Charles Jenkins, not to be confused with Frederick County Sheriff Chuck Jenkins, was elected county commissioner in 2006 and in 2010 he was appointed to finish out the vacant seat left by former Delegate Rick Weldon, who chose to resign his position.  Charles desperately sought to be elected in 2011 to the delegate seat that was his, but suffered defeat in that effort.

Jenkins in his own right evolved as a maverick in the world of local politics.  He was voted into his commissioner seat with the support of the business community, but by the time he exited for an appointment to one in Annapolis, he had played a part in sinking the effort to dodge bankruptcy by the developer’s of Frederick eternal stepchild: Lake Linganore.

As of late, Charles seems to be settled into a livelihood of real estate broker by day and guest columnist for the Frederick News-Post by night.

In last year’s election he was an outspoken critic of the effort to adopt the Charter Home Rule form of government.

This past Sunday in a Frederick News Post op-ed by “Sir Charles”, he grabbed my attention with a not so subtle proclamation that Ms. Gardner will be the Frederick County’s first County Executive.  Below the surface of his words, I detected a hit of resentment and maybe a touch of anger at the Young administration.

He seems to be stating that he likes Gardner more than he dislikes Young, who has raised in excess of $500,000 over the last two years as he pursued an effort to run for Governor … or was it a stealth move to build a cache for a run for county executive even before a document was drafted by the Charter Board?

In any event the Proclamation by Sir Charles was eye catching and probably nothing more than that.  If anyone actually thinks that the race for County Executive will be nothing more than a coronation of the first Queen of the county, please think again.

It could be that he feels the same way about Hillary Clinton’s destiny, as she undoubtedly positions herself to be the first female President of the United States!?!

Surely, Gardner is well known, served three terms as a county commissioner and has a strong following, but to think that she will walk on water to her throne … well, I doubt that even she thinks that will be the case.

Yes, Charter Home Rule will change the rules on how our local government will operate.  No longer will a simple majority of three commissioners be able to change the course of the political winds.  It will now take the votes of a minimum of four of the seven council members and one from the County Executive to part the seas of policy.

That, in and of itself, will create more of what I like to call healthy gridlock, which for the first time in decades, Frederick County will likely find is a refreshing change from the dizziness of the last twenty years!

The author: Rocky Mackintosh, President, MacRo, Ltd., a Land and Commercial Real Estate firm based in Frederick, Maryland. He served as a member of the Frederick County Charter Board from 2010 to 2012.  Many of his articles also appear in  TheTentacle.com