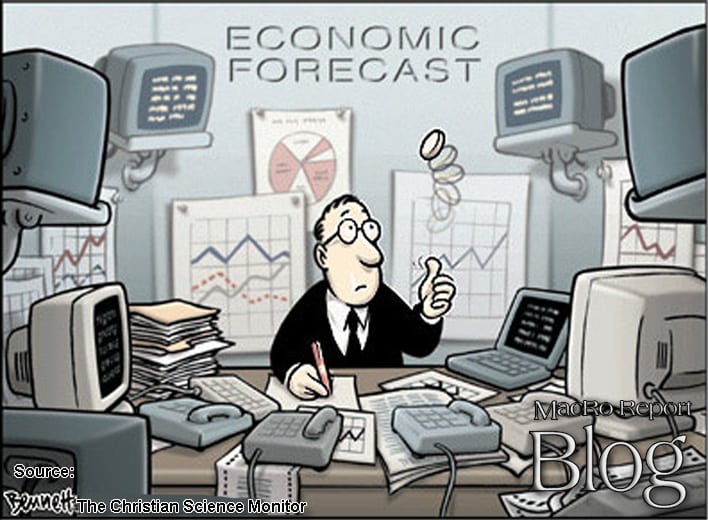 Right from the start, I want to thank Rob Tuggle, Market President at BB&T, for the invitation to this year’s event held on January 3, 2014 at the Renaissance Haborplace Hotel in Baltimore.

I always find it interesting to hear a diversity of perspectives on where the professionals think the economy is heading.

This year’s forum featured a number of impressive speakers:

This well healed cast of characters did not all sing from the same song sheet.

Here are some highlights that those of us who play in the world of commercial real estate brokerage, investment and development may find interesting:

The Fed has been purchasing about $85 billion in bonds every month since the end of the third quarter of 2012.  Bernanke has made it clear that the Federal Reserve will continue pumping money into the economy until the job market improves.

“This has created certainty in the market,” stated Basu.

Krosby expects that his successor Janice L. Yellen will follow the same course.  Generally all speakers believe that the pace will begin a moderate tapering as we approach the spring of this year.  But expect that this policy will not cease anytime soon.

With job growth still increasing at a very slow pace, many see an overall improvement in the nation’s economy in 2014.  The final tally for 2013 is expected to show that the economy grew at a meager 2%, and most expect this year will increase to around 3%.

Lacker expects that to double in 2014 to around 2%, with no deflation on the horizon.

Interest rates will begin to steadily increase proportionally with the amount of tapering carried out by the Federal Reserve.  Current rates of 4.5% will likely be 5.5% twelve months from now.

Real Estate – Winners and Runners Up:

Seems that the general feeling is that there may not be any real losers in 2014.

With businesses finding that they must build up their inventories to maintain a competitive advantage, expect commercial and industrial property activity to be stronger than in 2013; however Khan predicts that retail growth will be slower in ’14.

There was a strong increase in hotel demand in 2013, due to foreign travelers from Brazil and China.  But with their economies dipping, that could impact 2014 somewhat.  However, with increasing values of retirement funds, the Baby Boomers are getting out more.

The big winner in this arena will be visible growth multifamily housing according to Khan, but she expects this to be short lived.

The single family market will begin to experience a shift in the types of buyers with a movement away from investors to a stronger amount of the traditional user consumer.  While housing prices increased at a rate of 13% in 2013, Khan thinks this will slow considerably.  Housing starts will continue to be strong, but not like last year.  Much of this will be related to increasing interest rates.

The Washington DC metro area can now boast that it has the second lowest unemployment rate (5.9%) in the nation, hovering above the Minneapolis-St. Paul market with a rate of 4.1%.

In Maryland, Montgomery and Howard counties continue to have the highest percentage of employed residents (except during that brief period of the government shutdown).  Frederick County is ranked 16th in the state with unemployment at 5.7%.

Lacker stated that for the coming year, he believes that employment growth remain the same as the last 4 years … around 1.0%.

He continued that with the working age population shrinking, companies state that they cannot find good labor.  Technology, says Lacker, may be shifting too fast to make up the difference.

Basu made a point of stating that government data is becoming less and less reliable over that last several years, and suggested caution in leaning heavily on such.

Growth is real.  According to Pampush stocks are not overvalued.  The big returns in 2013 were driven by expansion, and top line pressure will now be for stronger returns in the coming year.

BB&T’s Jeffrey Schappe threw a bit of cold water on outlook with a reminder that there were far more losers than big winners in 2013.

Remaining consistent Schappe proved to be First Friday’s the pessimist in the room.   He offered that the US economy was actually very close to falling into a new recession in 2013.

Schappe expects a softening economy and states that by a margin of 10 to 1 of businesses surveyed there is a negative outlook for the economy.

He asks that if things are as rosy as many are saying, why is it that the Fed is extending its policy of quantitative easing with no real end in sight?

The general feeling among the speakers was that an increase in the minimum wage and the implementation of Obamacare will not have much of an impact on the 2014 economy; however there were mixed reviews on what they will mean in later years.  Schappe added that “at the end of the day, we are transferring wealth,” which creates uncertainty.

Speaking of uncertainty, Lacker noted that the number one threat that consumers see to a stable recovery is government red tape and over regulation.  “Business and investors need to know the rules,” said Schappe, “when government keeps changing them, this creates real uncertainty.”

He also noted that real personal income growth continued to trend negatively, while personal consumption is increasing.  Student loans and auto loans have increased dramatically with longer amortization periods and down payments at zero in many cases.

Basu added that governmental structural deficits are growing.  In Maryland he stated that the O’Malley administration has raised taxes “in every conceivable way,” yet no real progress of reduction is in sight.

The next twelve months hold promise for the real estate industry.  Inflation will be very low, interest rates will increase about 1.0% over this period and the stock market will continue to show good gains.

The Fed will continue its policy of making all this possible pumping more new money into the economy, but with a bit of tapering that is solely dependent on positive economic indicators.

While many forecasters believe that the trends are clear that a growing economy will continue for years to come, others state that the fog is too thick beyond a year’s time.  Lacker put it this way: “From a longer-run perspective, it’s worth noting that current law still implies an unsustainable path for federal expenditures and receipts.”

So fellow travelers, the word is to enjoy the ride, but proceed with caution!

The author: Rocky Mackintosh, President, MacRo, Ltd., a Land and Commercial Real Estate firm based in Frederick, Maryland. He served as a member of the Frederick County Charter Board from 2010 to 2012.  Many of his articles also appear in  TheTentacle.com